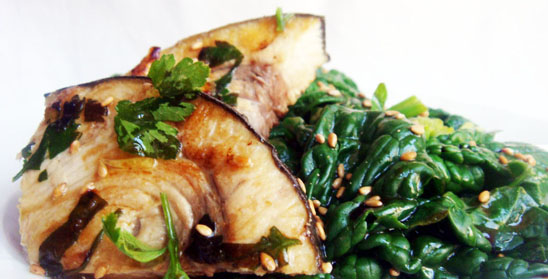 And here we come to another part of me that uses foods, such as ginger and soy sauce, unrelated to the tradition of Italian cuisine.
Ginger is now very easily found and its antioxidant properties are well known. A large glass of hot water, with fresh ginger juice, drunk before meals promotes and stimulates digestion. Soy sauce replaces salt as well as giving a strong and defined taste.

Meanwhile cook the steamed spinach and arrange them on the two plates.
Season with a teaspoon of extra virgin olive oil and the ginger root juice. (attention because it is very spicy, I suggest you start with a small teaspoon and then add more if necessary).
Do not add salt!

After the marinating time, heat a non-stick pan or grill and when it is hot, lay the fish on it and brush with the marinade sauce alone.
Cook for no more than four / five minutes per side, depending on the thickness of the steaks, remembering that it is better that the fish remains pink inside instead of white and dry!
Before removing the fish from the pan, sprinkle it with a dash of soy sauce, then season it with sesame and arrange it in the plate with the spinach.
Finish with garlic, parsley and lemon peel and if you like, add more soy sauce.

P.S. Remember not to salt anything because the soy sauce is very salty.
When you have to marinate fish or meat, and in the marinade there is oil, do not put them in the refrigerator because at low temperature the oil tends to solidify and you will not get the desired effect.

they say about me